Solution architect Kevin Miller, who played an instrumental role in developing the technology, announced the availability of his Firefox add-on for Windows via his blog.

Why is Firefox support important? Until there is more third-party support for Microsoft's CardSpace, it will be slow to gain traction. But until CardSpace gains more traction, developers will be reluctant to build applications that make use of it. CardSpace, the technology formerly known as InfoCard, is a key piece of Microsoft's proposed Internet-wide identity metasystem.

CardSpace is designed to store centrally an individual's multiple digital identities used to log into different secure sites (not quite – see below). Microsoft built support directly into Internet Explorer 7.0. And CardSpace is one of the elements of the .Net Framework 3.0, which Microsoft introduced alongside Windows Vista and has back-ported to Windows XP and Windows Server 2003. 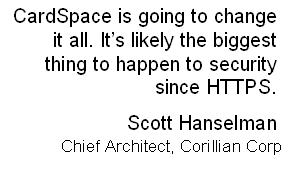 Miller blogged: “You can download the (Mozilla CardSpace) extension here for now. I'll jump through the hoops over at addons.mozilla.org this week, and hopefully it will be available there soon. I'll post an update when it is there. I've also set up a project over at Codeplex (as mentioned briefly in my first post), and will get the code posted there in the next day or so.”

Scott Hanselman, chief architect with Corillian Corp., a Hillsboro, Ore.-based financial-services integrator, is bullish about CardSpace's prospects. “CardSpace is going to change it all. Itâ€™s likely the biggest thing to happen to security since HTTPS. CardSpace changes the game for consumers. Itâ€™ll take a few years, but after IE7 and FireFox and MacOSX all have CardSpace implementations â€“ and it wonâ€™t take long â€“ weâ€™ll see Identity 2.0 happen,” Hanselman said.

“If you contrast (CardSpace) with the way certificate management has traditionally worked on nearly any OS, itâ€™s significant because it makes secure certificates accessible to my mom. CardSpace and its related specifications make a secure identity experience accessible, both to the user and to the programmer.”

There are a number of other third-party companies and coalitions beyond Mozilla developing CardSpace-compatible providers and support.  Even Microsoft's own Windows Live team is looking to throw its backing behind the effort. The Windows Live ID team is developing a security token service (STS) that supports CardSpace, according to Richard Turner, senior product

(Live ID is the successor to Microsoft's Passport authentication system.)

“We need a proliferation of ID providers,” Turner said. “LiveID is just one of those providers.”

Mary Jo does an admirable job of describing what's at stake here, though I need to remind readers that CardSpace doesnt actually store digital identities centrally – it just stores metadata (pointers) to identity providers.  This may sound like nit-picking, but it's hugely important in mitigating risk.

The main point is that Kevin has done some great work here.  I've used his plugin with Firefox and it works beautifully.  If you use Firefox on Windows, give it a try.

I'll try to start compiling a list of resources so people can easily see what to download given various configurations and predelictions.