Reading Matias Woloski's blog I see that Southworks has put its work bridging OpenID and WS-Federation into an open source project (download here).    This is a great move.  He also shows some screen shots that give a good feel for what was involved in the Medtronics proof of concept described here.  Matias writes:

A year ago I wrote a blog post about how to use the Windows Identity Foundation with OpenID. Essentially the idea was writing an STS that can speak both protocol WS-Federation and OpenID, so your apps can keep using WIF as the claims framework, no matter what your Identity Provider is. WS-Fed == enterprise, OpenID == consumer…

Fast forward to May this year, I’m happy to disclose the proof of concept we did with the Microsoft Federated Identity Interop group (represented by Mike Jones), Medtronic and PayPal. The official post from the Interoperability blog includes a video about it and Mike also did a great write up…

The business scenario brought by Medtronic is around an insulin pump trial. In order to register to this trial, users would login with PayPal, which represents a trusted authority for authentication and attributes like shipping address and age for them. Below are some screenshots of the actual proof of concept: 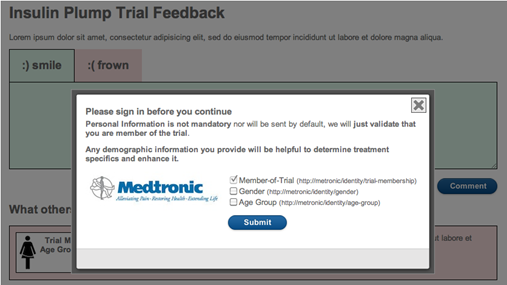 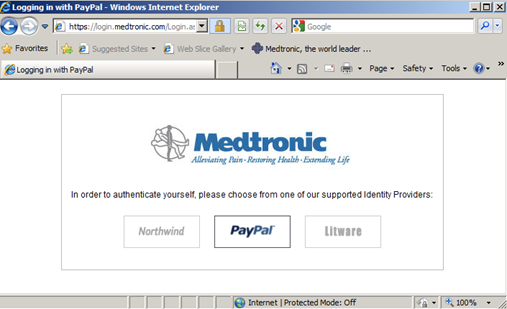 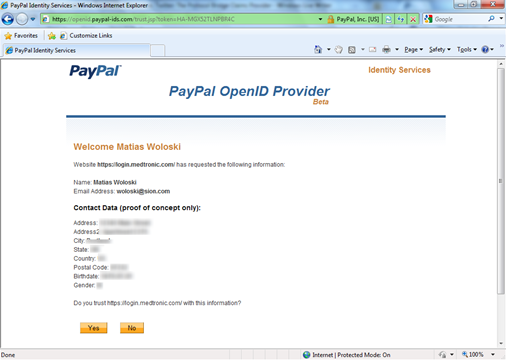 While there are different ways to solve a scenario like this, we chose to create an intermediary Security Token Service that understands the OpenID protocol (used by PayPal), WS-Federation protocol and SAML 1.1 tokens (used by Medtronic apps). This intermediary STS enables SSO between the web applications, avoiding re-authentication with the original identity provider (PayPal).

Also, we had to integrate with a PHP web application and we chose the simpleSAMLphp library. We had to adjust here and there to make it compatible with ADFS/WIF implementation of the standards. No big changes though.

We decided together with the Microsoft Federated Identity Interop team to make the implementation of this STS available under open source using the Microsoft Public License.

And not only that but also we went a step further and added a multi-protocol capability to this claims provider. This is, it’s extensible to support not only OpenID but also OAuth and even a proprietary authentication method like Windows Live.

DISCLAIMER: This code is provided as-is under the Ms-PL license. It has not been tested in production environments and it has not gone through threats and countermeasures analysis. Use it at your own risk.

This endeavor could not have been possible without the professionalism of my colleagues: Juan Pablo Garcia who was the main developer behind this project, Tim Osborn for his support and focus on the customer, Johnny Halife who helped shaping out the demo in the early stages in HTML :), and Sebastian Iacomuzzi that helped us with the packaging. Finally, Madhu Lakshmikanthan who was key in the project management to align stakeholders and Mike who was crucial in making all this happen.