Back from vacation and catching up on some blogs I found this piece by Felix Gaehtgens at Kuppinger Cole in Germany:

A good year ago, Microsoft acquired an innovative company called U-Prove. That company, founded by visionary Stephan Brandt, had come up with a privacy-enabling technology that effectively allows users to safely transmit the minimum required information about themselves when required to – and for those receiving the information, a proof that the information is valid. For example: if a country issued a digital identification card, and a service provider would need to check whether the holder over 18 years of age, the technology would allow to do just that – instead of having to transmit a full data set, including the age of birth. The technology works through a complex set of encryption and signing rules and is a win-win for both users who need to provide information as well as those taking it (also called “relying parties in geek speak”). With the acquisition of U-Prove, Microsoft now owns all of the rights to the technology – and more importantly, the associated patents with it. Stephan Brandt is now part of Microsoft’s identity team, filled with top-notch brilliant minds such as Dick Hardt, Ariel Gordon, Mark Wahl, Kim Cameron and numerous others.

Privacy advocates should (and are) happy about this technology because it effectively allows consumers to protect their information, instead of forcing them to give up unnecessary information to transact business. How many times have we needed to give up personal information for some type of service without any real need for this information? For example, if you’re not shipping anything to me… what’s the point of providing my home or address? If you are legally required to verify that I’m over 18 (or 21), why would you really need to know my credit card details and my home address? If you need to know that I am a customer of one of your partner banks, why would you also need to know my bank account number? Minimum disclosure makes transactions possible with exactly the right fit of personal details being exchanged. For those enterprises taking the data, this is also a very positive thing. Instead of having to “coax” unnecessary information out of potential customers, they can instead make a clear case of what information they do require for fulfilling the transaction, and will ultimately find consumers more willing to do business with them.

So all of this is really great. And what’s even better, Microsoft’s chief identity architect, Kim Cameron has promised not to “hoard” this technology for Microsoft’s own products, but to actually contribute it to society in order to make the Internet a better place. But more than one year down the line, Microsoft has not made a single statement about what will happen to U-Prove: minimum disclosure about its minimum disclose technology (pun intended!). In a post that I made a year ago, I tried making the point that this technology is so incredibly important for the future of the Internet, that Microsoft should announce its plans what do with the technology (and the patents associated for it).

Kim’s response was that Microsoft had no intentions of “hoarding” the technology for its own purposes. He highlighted however that it would take time to do this – time for Microsoft’s lawyers, executives and technologists to irk out the details of doing this.

Well – it’s been a year, and the only “minimum disclosure” that we can see is Microsoft’s unwillingness to talk about it. The debate is heating up around the world about different governments’ proposals for electronic passports and ID cards. Combined with the growing dangers of identity theft and continued news about spectacular leaks and thefts of personal information, this would really make our days. Unless you’re a spammer or identity thief of course.

So it’s about time Microsoft started making some statements to reassure all of us what is going to happen with the U-Prove technology, and – more importantly – with the patents. Microsoft has been reinventing itself and making a continuous effort to turn from the “bad guys of identity” a decade (in the old Hailstorm days with Microsoft Passport) into the “good guys” of identity with its open approach to identity and privacy protection and standardisation. At Kuppinger Cole we have loudly applauded the Identity Metasystem and Infocards as a ground-breaking innovation that we believe will transform the way we use the Internet in the years to come. Now is the time to really start off the transformative wave of innovation that comes when we finally address the dire need for privacy protection. Microsoft has the key in its hands, or rather, locked in a drawer. C’mon guys, when will that drawer finally be opened?

Kuppinger Cole has been an important force in creating awareness about the role of an Identity Metasystem. It has also led in stressing the importance of minimal disclosure technology. I take Felix's concerns very seriously. He's right – I owe people a progress report.

This said, there is no locked drawer. Instead, Felix gets closer to the real explanation in his first paragraph: “the technology works through a complex set of encryption and signing rules.”

The complexity must be tamed for the technology to succeed. There is more to this than brilliant formulas or crypto routines. We need to understand not only how minimal disclosure technology can be used – but how it can be made usable.

There are different kinds of research. Theoretical research is hugely important. But applied research is just as key. Over the last year we've moved from an essentially theoretical grasp of the possibilities to prototypes that demonstrate the feasibility of deploying real, large-scale distributed systems based on minimal disclosure.

So we've been working hard on figuring this stuff out. In fact, a lot of progress has been made, and I'll write about that in my next few posts. I'll also reach out to anyone who wants to become more closely involved.

Here's the most beautiful take yet on the Seven Laws of Identity – put together by Karon and Katrika, who even saw how the Laws connect with the Perception of Ailatan.  In the past people have asked why I didn't do a Laws of Identity poster – this must be it.  Click to view full size. 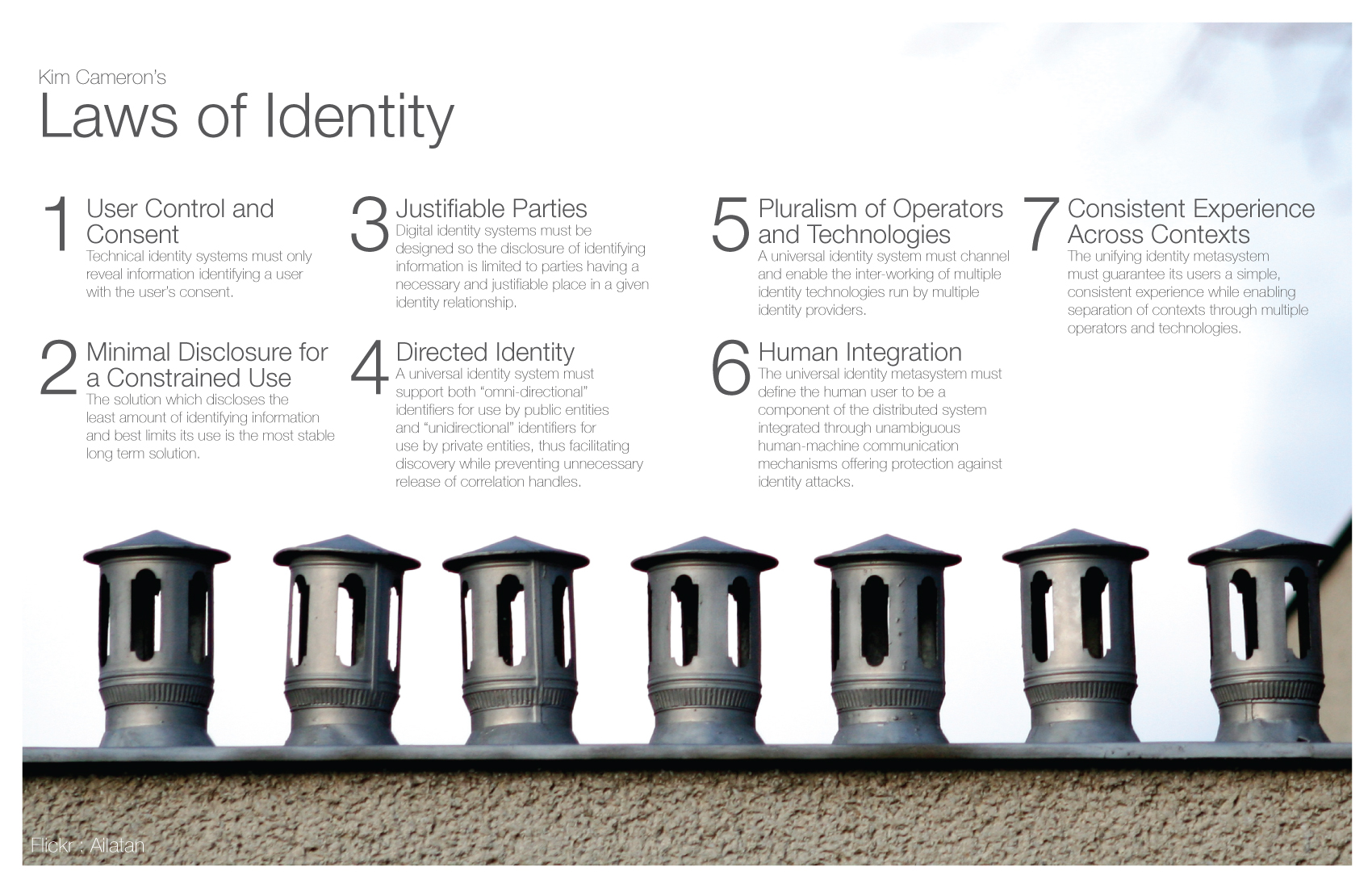 One of the people whose work has most influenced the world of security – a brilliant researcher who is also gifted with a sense of irony and humor – received this email and sent it on to a group of us.   He didn't specify why he thought we would find it useful…

At any rate, the content boggles the mind.  A joke?  Or a metaspam social engineering attack, intended to bilk jealous boyfriends and competitors?

Or… could this kind of… virus actually be built and… sold?

Subject: MMS PHONE INTERCEPTOR – THE ULTIMATE SPY SOLUTION FOR MOBILE PHONES AND THE GREAT PRODUCT FOR YOUR CUSTOMERS

MMS PHONE INTERCEPTOR – The ultimate surveillance solution will enable you to acquire the most valuable information from a mobile phone of a person of your interested.

Now all you will need to do in order to get total control over a NOKIA mobile (target) phone of a person of your interest is to send the special MMS to that target phone, which is generated by our unique MMS PHONE INTERCEPTOR LOADER.

This way you can get very valuable and otherwise un-accessible information about a person of your interest very easily.

The example of use:

You will send the special MMS message containing our unique MMS PHONE INTERCEPTOR to a mobile phone of e.g. your girlfriend

In case your girlfriend will be using her (target) mobile phone, you will be provided by following unique functions:

All these functions may be activated / deactivated via simple SMS commands.

A target mobile phone will show no signs of use of these functions.

As a consequence of this your girlfriend can by no means find out that she is under your control.

These unique surveillance functions of target phones may be used to obtain very valuable and by no other means accessible information also from other subjects of your interest {managers, key employees, business partners etc, too.

I like the nostalgic sense of convenience and user-friendliness conjured up by this description.  Even better, it reminds me of the comic book ads that used to amuse me as a kid.  So I guess we can just forget all about this and go back to sleep, right?