I was awakened from my vacation from the blogosphere today by the braying of Sun’s new YouTube video “comedy”.   It features a droll engineer with a great sense of deadpan, but when all is said and done, it is bully comedy, with all the subtlety of a bully beating up his smart little brother.

The premise seems to be that big strong Sun has 35,000 technical support engineers ready to descend in buses on customers who deploy one of Sun’s IDM solutions (could their products require a whole lot of support???), whereas the customers of “little Ping Identity” are left on their own to cope with mere off-the-shelf products.

Ping has been a real innovator and thought leader in digital identity.  Why attack it?  I can only see one explanation:  the Ping folks must be making a significant dent in Sun’s marketplace.  Even so, it is hard to imagine such a low-road response.  The word “unseemly” comes to mind.

FYI, while I have no firsthand experience with Ping, various customers have told me good things about their products, attitude and responsiveness.  To me that’s the litmus test.

Cyberspace needs a whole range of players innovating around digital identity.  We’re lucky to have Ping in the equation.

One of the significant questions being posed is whether you need to hire a busload of engineers to deploy federation and identity management.  Sun’s video takes it as a given that this is the case, but if I were a customer I would head for the hills when I saw the big Sun bus coming for me. 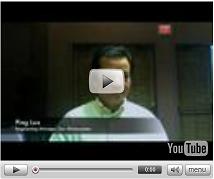 A meaningful identity metasystem, something capable of providing an identity layer for the internet, must be based on commercial off the shelf products that can be deployed by any system administrator.  Ping Identity is pushing the envelope in this area, as are a number of us.  Our goal is achieving ubiquity, not the renting out of consultants.

Beyond the technical issues, we need to work as an industry towards “federation boilerplates” and a legal framework that drives the cost of creating virtual organizations to zero.

Since identity requires all of us to interoperate, I think people should hold off on attack ads and concentrate on expanding the market.

I don’t normally criticize any of the identity players for their strategy, but I sure would like to see Sun go after the 99.9% of organizations with no federation framework rather than turning on Ping and its successes.

This having been said, Ping doesn’t need me to come to its defense.  Its fearless leader, Andre Durand, responded with a hilarious video called The Epic Battle: 72 VS 35,000, that blows the original Sun video right out of the water.  Don’t miss it.