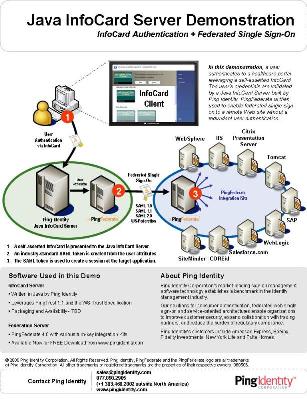 Andre Durand of Ping Identity has told me about what he'll be demonstating at Catalyst 2006 – important stuff.  As the post at the right puts it:

A user authenticates to a healthcare portal leveraging a self-asserted InfoCard. The userâ€™s credentials are validated by a Java InfoCard Server built by Ping Identity. PingFederate is then used to enable federated single sign-on to a remote Web site without a redundant user authentication.

I've spent a lot of time over the last year trying to convince colleagues across the industry that InfoCard technology is not positioned against Liberty or SAML or WS-Federation technology – that federation protocols could be used on portals powered by WS-Trust through InfoCards.

Now Ping has an implementation that actually proves it.  I guess this means I can take a break, cool my jets, lay low, and chill.  Thanks Andre.

Under the covers, the integration can be done in a number of different ways, so I look forward to seeing the details of how Ping has approached it.  To download the Ping poster and see the details, click here.

I'm impressed by Ping's ability to continue to innovate in the identity world.