Just when I was getting over being traumatized by a glitch in the iTunes user interface, Cory stirred me up again.  Good thing that the tracks I can actually play on my stereo are so wonderful.

If you buy the latest Bob Dylan album from the iTunes Music Store, be prepared to lose four of the tracks when you burn it to CD. Four of the tracks on “Modern Times,” which is only sold as a whole album on the iTMS, are only made available as video files, and iTunes isn't designed to allow you to burn the audio portion of a video when you burn your CD.

I got this information from Amazon and I suspect Cory did the same.  But I haven't actually seen the molecular product, which is confusing because there are two versions as well, so maybe the same problem of unrippable music exists there.  It doesn't change much, despite what deadlocked says.

The iTunes experience is lauded for its consistency and fairness, and for the ease with which iTunes customers can convert their purchased songs into MP3s. But this is a dramatic failure of the consistency, clarity and ease of iTunes.

First, when you attempt to burn the album (with the video-files, which are only distinguished from the audio-files by a small, obscure grey icon) to CD, the iTunes error message says only that the files “cannot be burned to an audio CD,” which led Kim Cameron, an experienced computer user and IT executive, to conclude that the files were locked — an error stating that these were video files would have been clearer. 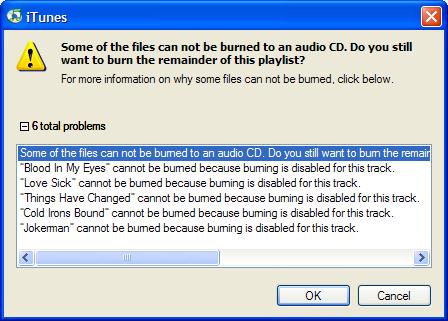 You know, Cory's right. I am an experienced computer user. And I was really confused. Maybe I'm being punished for the people I've confused with some of my own early interfaces?  I sure didn't liken any part of this experience.

Second, the whole Modern Times package defeats the simplicity of the iTunes pricing model — $0.99/track for any track. While the $14 price-tag gets you 14 “tracks,” it's not possible to buy singles from the disc, nor is there any discount for buying the whole CD instead of a tack-by-track purchase. And since four of the tracks are not “music” in the sense of being burnable and rippable, you're really paying more on a per-track basis. Remember the outcry when Edgar Bronfman, Jr threatened to raise the cost of some iTunes songs and lower the cost of others? Here we have a similar kind of differential pricing sneaking in via the back-door.

Finally, here's a way in which buying iTunes tracks creates real long-term lock-in to iTunes and iPods: since iTunes videos are locked to the Apple platform, and since the only way to get any of Modern Times through iTMS is to pay for these videos, Apple and Dylan are slyly adding some lock-in to the user experience without any explicit statement about it.

Apple could make this much better by offering both the videos and the audio, or by patching iTunes to allow for burning of the audio portion of videos. But better still would be to turn off the DRM altogether. There's another way to get Modern Times and burn it to a CD: you can buy it from AllOfMP3.com, a service of disputed legality, for a fraction of Apple's pricing. Or you can download it from a P2P network. Apple's offering costs more and does less than its competitors’. How can this possibly be good business-sense?