I wanted to hear the new Bob Dylan album last night.  So I went to iTunes (first time there), bought the album, downloaded it.

And guess what?  I couldn't burn it to CD.

I could only listen to it inside the iTunes application. 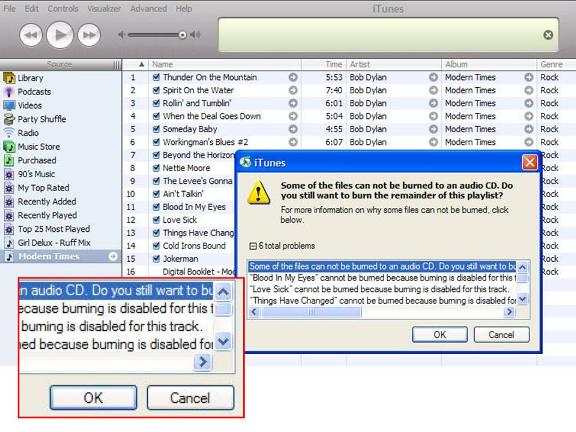 My reaction:  this must be really crazy DRM.  Nutso actually.  But then there was worse.

It turned out that Modern Times is a – you guessed it – Sony record.

I could just see the same crew who concocted the stinky Sony rootkit selling “Son of Rootkit” to iTunes.

Here's what iTunes had promised me on their official site:

Burning playlists with purchased songs in iTunes 4.5 and later

If a playlist contains any songs purchased from the iTunes Music Store, iTunes software restricts the number of times the same playlist may be burned to seven.

I wouldn't have objected to stupid zero-copy DRM if I'd known about it ahead of time – I would have just “stayed away”.  But telling me I have seven copies and then telling me that “buring is disabled”?

Poor Dylan. Surely he can't be part of this – though he's the producer on this recording.  He said during his recent Rolling Stone interview:

We all like records that are played on record players, but let's face it, those days are gon-n-n-e.

Hey, not only are records gone – it seems CDs are gone too.  There will just be bits, zeros and ones, run from Sony's world wide underwater headquarters.  No wonder everyone has had their fill of these guys.

But back to Bob:

You do the best you can, you fight that technology in all kinds of ways…  You listen to these modern records, they're atrocious, they have sound all over them. There's no definition of nothing, no vocal, no nothing, just like — static.

Maybe it's all just a terrible mistake.  A programming error.  I hope so.  Otherwise, anyone for a class action suit?

UPDATE:  The “burning is disabled” message is what iTunes puts up when some of the files have video as well as audio content.  You can copy the first ten the tracks, but not the audio portions of the other four tracks – even though, according to Amazon, the plastic version of this includes one CD with all 14 songs and a DVD containing audio-video for 4 of the 14.