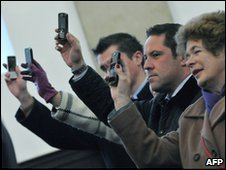 Now that the world is so thoroughly post-modern, how often do you come across information that qualifies as unexpected?  Well, I have to say that the following story , appearing in the The Australian, left me wide-eyed:

Yesterday, in the church of the City of London Corporation, (Canon Parrot)  presented an updated version of Plow Monday, an observance that dates from medieval times. On this day, the first Monday after Twelfth Night, farm labourers would bring a plough to the door of the church to be blessed.

“When I arrived a few months ago I looked at this service and thought, ‘Why do we have a Plow Monday?’,” Canon Parrott said. Men and women coming to his church no longer used ploughs; their tools were their laptops, their iPhones and their BlackBerries.

So he wrote a blessing and strode out to deliver it before a congregation of 80, the white heat of technology shining from his every pronouncement. “I invite you to have your mobile phone out … though I would like you to put it on silent,” he said.

This was Church 2.0. Behind him, the altar resembled a counter at PC World. Upon it, laid out like holy relics, were four smart phones, one Apple laptop and one Dell.

Then, after another hymn, came the blessing of the smart phones. The Lord Mayor of London offered his BlackBerry to Canon Parrott, which was received with due reverence and placed upon the altar.

The congregation held their phones in the air, and Canon Parrott addressed the Almighty. “By Your blessing, may these phones and computers, symbols of all the technology and communication in our daily lives, be a reminder to us that You are a God who communicates with us and who speaks by Your Word. Amen.”

It makes me wonder what Innis said to McLuhan when he read abut this.

Le Figaro carried a report of an additional prayer, “”May our tongues be gentle, our e-mails be simple and our websites be accessible”.

Perhaps it is asking too much, but I would have really liked Father Parrott to add, “websites be accessible and secure.”  After all – it can't hurt.   Perhaps next time?