The recent European Identity Conference 2008 featured the presentation of Kuppinger Cole's European Identity Awards. Vendors, integrators, consultants and user companies were asked for nominations. For each category, three outstanding projects and innovations were nominated as finalists. Here is how Kuppinger Cole framed the results:

“The award went to a group of companies that are driving forward the process to outsource authentication and authorisation, making it easier to control application security ‘from outside’.   There are several providers with different approaches in this field but during the past year, they all contributed a lot to promote this concept, considered as indispensable by KCP.   The winners in this category are Bitkoo, CA, iSM, Microsoft and Oracle.

“Also among the finalists were Aveksa and Sailpoint for their Identity Risk Management solutions and Microsoft for making a significant contribution to identity information protection in distributed environments through their takeover of Credentica and the planned integration of U-Prove technology into user-centric Identity Management.” 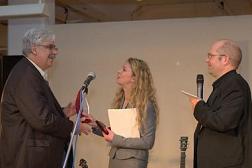 “The award went to the OpenID Foundation and to Microsoft for their InfoCard initiative. These standards form the base for Identity 2.0, the so-called user-centric Identity Management.

“Other outstanding solutions nominated as finalists were the eCard API Framework and the simpleSAMLphp project driven forward by Feide RnD. The eCard API Framework has been jointly developed by Secunet and the Bundesamt für Sicherheit in der Informationstechnik (abbreviated BSI – in English: Federal Office for Security in Information Technology) to simplify the interaction of applications with different card technologies. With simpleSAMLphp, federation functions can easily be integrated into existing and new applications.”

“The award went to BASF for their AccessIT project, which realises Identity Management within a complex corporate structure and excells in consistent approaches to centralised auditing.

“Another finalist in this category was the Royal Bank of Scotland, with its project to control a multitude of applications by an integrated role-based access control.”

“The award went to Orange/France Telecom.  Their project is revolutionary due to the consistent use of federation and the opening of systems to partners.

“Also among the finalists in this category were Endress+Hauser for their business customer portal and education network SurfNET which is at present one of the most comprehensive federation implementations.”

“The award went to eBay and Paypal which support strong authentication mechanisms, thus making a significant contribution to the protection of online transactions and creating more awareness on this issue among the wider public.

“Other finalists were Karlsruhe-based company Fun Communications for their innovative approach to the use of info cards as virtual customer cards, which is groundbreaking in our opinion, and KAS bank for their consistent use of strong authentication and encryption technologies to protect transactions.” 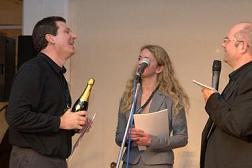 “Special prizes were given to two initiatives considered as groundbreaking by KCP.

“In KCP's opinion, the VRM project by Doc Searls is an innovative approach that applies user-centric Identity Management concepts to customer management. In the VRM Unconference 2008 at the EIC 2008, this issue was intensely discussed in Europe for the first time.

“The second special prize went to open source projects Higgins and Bandit which we think are the most important open source initiatives in Identity Management.”

[Thanks to Jackson Shaw for Photos]