LightBlueTouchpaper, a blog by security researchers at Cambridge University, has posted details of a study documenting easy attacks on the new generation of British bank cards.  Saar Drimer explains, “This attack can capture the card’s PIN because UK banks have opted to issue cheaper cards that do not use asymmetric cryptography”.  Let's all heed the warning:

Steven J. Murdoch, Ross Anderson and I looked at how well PIN entry devices (PEDs) protect cardholder data. Our paper will be published at the IEEE Symposium on Security and Privacy in May, though an extended version is available as a technical report. A segment about this work will appear on BBC Two’s Newsnight at 22:30 tonight.

We were able to demonstrate that two of the most popular PEDs in the UK — the Ingenico i3300 and Dione Xtreme — are vulnerable to a “tapping attack” using a paper clip, a needle and a small recording device. This allows us to record the data exchanged between the card and the PED’s processor without triggering tamper proofing mechanisms, and in clear violation of their supposed security properties. This attack can capture the card’s PIN because UK banks have opted to issue cheaper cards that do not use asymmetric cryptography to encrypt data between the card and PED. 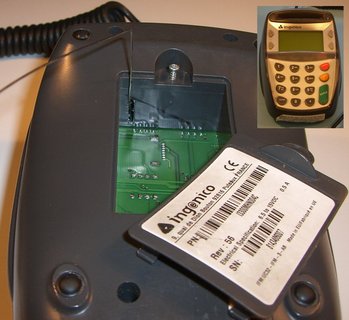 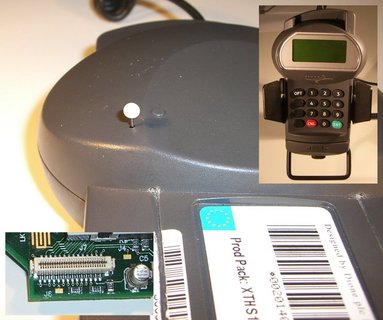 In addition to the PIN, as part of the transaction, the PED reads an exact replica of the magnetic strip (for backwards compatibility). Thus, if an attacker can tap the data line between the card and the PED’s processor, he gets all the information needed to create a magnetic strip card and withdraw money out of an ATM that does not read the chip.

We also found that the certification process of these PEDs is flawed. APACS has been effectively approving PEDs for the UK market as Common Criteria (CC) Evaluated, which does not equal Common Criteria Certified (no PEDs are CC Certified). What APACS means by “Evaluated” is that an approved lab has performed the “evaluation”, but unlike CC Certified products, the reports are kept secret, and governmental Certification Bodies do not do quality control.

This process causes a race to the bottom, with PED developers able to choose labs that will approve rather than improve PEDs, at the lowest price. Clearly, the certification process needs to be more open to the cardholders, who suffer from the fraud. It also needs to be fixed such that defective devices are refused certification.

We notified APACS, Visa, and the PED manufactures of our results in mid-November 2007 and responses arrived only in the last week or so (Visa chose to respond only a few minutes ago!) The responses are the usual claims that our demonstrations can only be done in lab conditions, that criminals are not that sophisticated, the threat to cardholder data is minimal, and that their “layers of security” will detect fraud. There is no evidence to support these claims. APACS state that the PEDs we examined will not be de-certified or removed, and the same for the labs who certified them and would not even tell us who they are.

The threat is very real: tampered PEDs have already been used for fraud. See our press release and FAQ for basic points and the technical report where we discuss the work in detail.

[Thanks to Richard Turner for the heads up.]

One thought on “UK Chip and PIN vulnerable to simple attack”