Despite my repeated requests not to go there, Paul Madsen of ConnectID has published a leaked, top secret, internal Microsoft Identity and Access photo.  His post reads as follows:

An un-named source in Redmond sent me this never before seen picture of the first ever infocards assembly line. 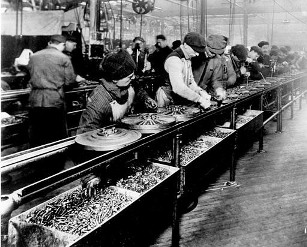 In the front you can see a worker inserting secret keys obtained from the bins below (the punch-card calculating machines on which those keys were generated are in another room). Other workers further down the line can be seen inserting attributes before securing the top of the cards with wrenches.

My source tells me that another line is planned.

Luckily, the IP revealed by this photo is part of the Open Specification Promise (OSP).  I checked with our operations people to see if the items in the bin  really are the secret keys, but apparently they are silver bullets.