While working on the Laws of Identity and CardSpace, it seemed that each new idea led inevitably to the next.  I really had no choice in arriving at the concepts that arose.  There was no other way to create an identity layer for the internet.

But as the issues unfolded, it became clear that the road to be travelled wasn't going to be easy.  In fact, it was going to be hard.  It involved risk.  It required people and organizations to rise to challenges that seemed almost impossible.  It needed profound goodwill.  Do we dare say it required trust?

In the early days, as I shared my conclusions, my colleagues in the blogosphere and the conference rooms would say, “Kim, we don't doubt your personal integrity, or your vision; but surely you can't expect us to believe that Microsoft is really going to back you on this stuff…”

And when I looked coldly at what would be required of Microsoft, I could see that there was probably no large company in the world that could do all the counter-intuitive things necessary for success.

The project could not succeed if we failed to achieve any of these.  And then, only after that, you had all the uncertainty associated with the introduction of any new paradigm, and any new product.  I would need a team willing to buy fully into all the architectural tenets, and to defend them with passion while building something eminently usable.

Other than love, there is little that is higher in my estimation than authenticity.  To actually be the architect of identity I was supposed to be, I would have to express what was required, try to find the language, try to build the context.   That's what this blog has been about, transforming itself so that more and more it became a place for me to learn and to work.

If this has all been a voyage, this week was a milestone.  The interoperability event at the Burton Group's Catalyst conference was stunning (more later).  The combined impact of the open source community and Microsoft and many other companies charging into this new world of Information Cards and claims-based computing was intoxicating.

But there was a second milestone as well – one which I had never predicted.  And although it seems like a personal one, it really isn't, so I hope you will let me share it with you.

I received an award from my colleagues at Microsoft.  Here's the congratulatory letter: 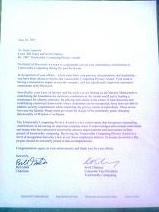 On behalf of Microsoft, we want to congratulate you for your outstanding contributions to Trustworthy Computing during the last year.

In recognition of your efforts – which stem from your passion, determination and leadership – you have been chosen to receive the Trustworthy Computing Privacy Award.  Your work is having a tremendous impact across the company, and has significantly improved customers’ interactions with Microsoft.

Specifically, your Laws of Identity, and the work you are leading on the Identity Metasystem, is establishing the foundation for electronic credentials in the virtual world, and is leading a renaissance for identity solutions. 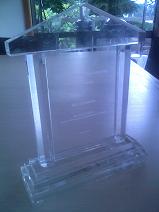 By placing individuals at the center of trust decisions and establishing contextual frameworks where credentials can be recognized, these laws are able to address security requirements while respecting the privacy needs of individuals.  These seven laws, and the identity metasystem, governed the design of the potentially game-changing functionality of Windows CardSpace.

The Trustworthy Computing Privacy Award is a key achievement that recognizes outstanding contributions in advancing an important company tenet. It acknowledges and rewards individuals and teams who have pioneered noteworthy process improvements and innovations in their pursuit of trustworthy computing.  Receiving the Trustworthy Computing Privacy Award is a level of recognition that only few of our finest employees achieve.  Everyone involved in this project should be extremely proud of this accomplishment.

Not only had Microsoft supported my work.  It had risen to the extreme challenges my work set for it.  And this would not have been possible without the contribution of many others, like Scott Charney, who were working to guide Microsoft in the same direction I was.

I was especially happy to receive the award from Bill Gates, whose vision reaches across every aspect of technology.  He, above anyone else, is the symbol of a Microsoft that “gets” identity, and I thank him very deeply. 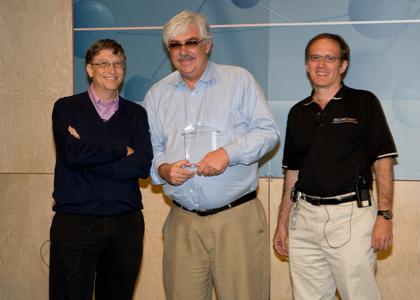 I don't normally get into a lot of stuff about Microsoft on the blog, but this award thing has made me stop and think about what she has been willing to do, OSP and all.  I congratulate her on what she has done already, and will continue to do, to move us closer to the identity big bang.