Even if the true meaning of uber-geek is “incomprehensible”, my last comment on the use of delegation in VRM was a real winner in terms of terseness. I was discussing Whit's notion that he wanted to give Amazon access to his behavior at Netflix, Powell's and lastfm – the goal being to improve Amazon's relationship with him by revealing more about himself as a complete person. So I'll try to unfold my thought process.

If you ponder the possible architectures that could be used, it becomes clear, as usual, that the identity aspects are the hardest. Let's build a little picture of the parties involved. Let's say the user (I know, I should be calling Whit a “customer”), shares his behavior with Amazon and Powell's. Now let's call some subset of his behavior at Powell's “BP“. Whit would like an outcome that would be modelled in the following diagram, assuming for the moment that U->A:BP just represents Amazon asking Powell's for the customer's relevant information. 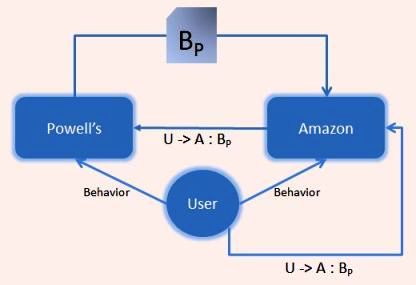 But how does Powell's know that Whit really wants it to release information to amazon.com but not snooper.com? How does it know that the amazon.com which calls for information is really the same Amazon that Whit was dealing with? Why should Powell's ever take the privacy risk of releasing information to the wrong party? What would its liability be if it were to do so? Can it protect itself from this liability?

When I mentioned delegation, I meant that while the user is “behaving” at Amazon, it gives Amazon a “coupon” that says “User delegates to Amazon the right to see his Behavior at Powell's”. I represent this as U->A:BP, where:

Amazon can now present this coupon to Powell's, along with cryptographic proof that it is the “A” in the coupon. By retaining this coupon and auditing any release, Powell's can indemnify itself against any accusation that it released information to the wrong party – and better still, actually defend the user's privacy.

‘Breaking up is hard to do.’

I have left two of the most important questions for another time. First, is it really necessary (or advisable) for Powell's to know that the Whit is sharing information with Amazon, rather than “some legitimate party”? Second, how does Whit revoke the permission he has granted to Amazon if he decides the time has come for them to “break up”?

But without even opening those cans of worms, it should be evident that, for reasons of privacy, auditablity and of liability reduction, everyone's interests are served by making sure no service ever acts as an end user. In this example, Amazon continues to act as Amazon, and even if its access is one day anonomized, would would always be identified as “the user's delegate”. The approach constrasts starkly with current approaches – as spooky as they are cooky – in which users release their credentials on “good faith” and eventually, if enough secrets are shared, anyone can be anyone.

Note:   The notation above is my own – please propose a better one if it is just as simple…

3 thoughts on “An example of delegation coupons”