Check out this interesting set of Identity Selector Permutations posted by Paul Madsen on his ConnectID blog.

In trying to make sense of the various combinations of OS, browser, plugins etc for enabling a client with a Cardspace compatible identity selector, I created the following graphic (click to enlarge…)

Caveat: It's almost certainly wrong in places, and doesn't account for Higgins. 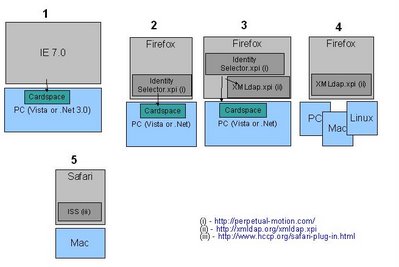