Here's a site dedicated to phishing control that has produced a bizarre mashup that I find fascinating – Web 2.0 meets Magnum PI.  It combines information from the Anti-Phishing Working Group with novel visualization techniques and animation so you can analyse the topologies of phishing trips over time.

A phishing message arrives in your mailbox, pretending to be from a bank, or from an etailer such as eBay or Paypal. It directs you to a web page and asks you to enter your password or social security number to verify your identity, but the web page is not one actually associated with the bank; it's on some other server.

InternetPerils has discovered that those phishing servers cluster, and infest ISPs at the same locations for weeks or months.

Here's an example of a phishing cluster in Germany, ever-changing yet persistent for four months, according to path data collected and processed by InternetPerils, using phishing server addresses from the Anti-Phishing Working Group (APWG) repository. 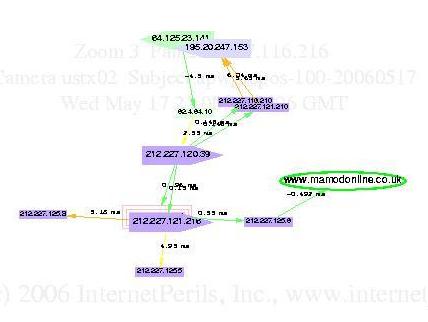 The ellipses in this animation represent servers; the boxes represent routers; and the arrows show the varying connectivity among them. Colors of boxes reflect ownership of parts of the network. Times are GMT.

Graphs were produced using PerilScopeâ„¢, which is InternetPerils‘ interactive topology examination interface, based upon the GAIN platform.

Go to their site to see the actual animated mashup.

One thought on “Anti-phishing Mashup”