Ben Laurie and Matasano Chargen describe a significant attack on RSA signature implementation (not the algorithm itself).  Quoting from Matasano:

Do I have your attention? Good, because this involves PKCS padding, which is not exciting. Bear with me.

RSA signatures use a public signing keypair with a message digest (like SHA1) to stamp a document or protocol message. In RSA, signing and verification are analogs of decryption and encryption. To sign a message, you:

Itâ€™s step 2 we care about here. Itâ€™s called â€œpaddingâ€. You need it because RSA wants to encrypt or decrypt something that is the same size as the RSA key modulus.

There are a bunch of different ways to pad data before operating on it, but the one everyone uses is called PKCS#1 v1.5 (technically, EMSA-PKCS1-V1_5-ENCODE). It involves tacking a bunch of data in front of your hash, enough to pad it out to the size of the modulus: 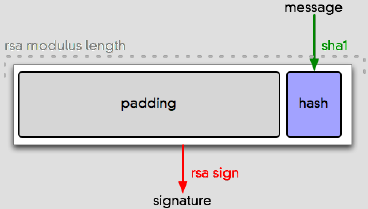 Note the order and placement of those boxes. Theyâ€™re all variable length. Letâ€™s call that out:

The two big goals of a padding scheme are (a) expanding messages to the modulus length and (b) making it easy to correctly recover the message bytes later, regardless of what they are. This padding scheme is designed to make that straightforward. The padding bytes are clearly marked (â€œ00 01â€, which tells you that PKCS#1 v1.5 is in use), terminated (with a 00, which cannot occur in the padding), and followed by a blob of data with a length field. This whole bundle of data is what RSA works on.

The problem is, despite all the flexiblity PKCS#1 v1.5 gives you, nobody expects you to ever use any of it. In fact, a lot of software apparently depends on data being laid out basically like the picture above. But all the metadata in that message gives you other options. For instance: 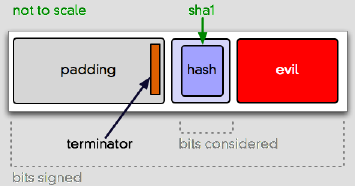 For some RSA implementations, this could be an acceptable message layout. Itâ€™s semantically invalid, but can appear syntactically valid. And if you donâ€™t completely unpack and check all the metadata in the signature, well, this can happen:

The problem is that this attack breaks the connection between (4) and (5). The hash, now â€œcenteredâ€ instead of â€œright-justifiedâ€, doesnâ€™t really mean anything, because the signature covers a bunch more bits.

RSA takes parameters, one of which is a â€œpublic exponentâ€, which is part of the public key. If that exponent is â€œ3â€, which it often is, an attacker can exploit broken signature validation code to forge messages. The math here, which Bleichenbacher claims is simple enough to do with a pencil and paper, gets a bit hairy for me (I lose it at polynomials). Dino explains it better than I do. The long and the short of it is, you validate an RSA signature by computing:

Good technical details in Hal Finneyâ€™s OpenPGP post (OpenPGP is not vulnerable). And a security advisory for OpenSSL (OpenSSL is vulnerable, through 0.9.8b).

My understanding is, the demonstrated attack sticks the evil bits outside of the DigestInfo (the hash data). The way I see the bug being described, broken implementations are just scanning the buffer without â€œfully decoding itâ€, implying that if they just validated the ASN.1 metadata against the signature buffer theyâ€™d be OK. That may be true, but it seems possible that a blind â€œmemcmpâ€ on an over-long SHA1 octet string, which would be ASN.1-valid and leave the Digest at the end of the buffer, could also trigger the same bug.

This is only a problem if:

Unfortunately, although the default for OpenSSL is â€œ65537â€ (no practical attack known for that), â€œ3â€ is common alternative: itâ€™s faster, especially in embedded environments. Ferguson and Schneier recommend it in Practical Cryptography. Checking the CA bundle for â€œcurlâ€:

gives 6 hits, from Digital Signature Trust Co. and Entrust.net. Those same certs are in Firefox. Firefox doesnâ€™t use OpenSSL; it uses NSS, and I donâ€™t know if NSS is vulnerable. Hereâ€™s the code. I see it extracting a SHA1 hashâ€™s worth of data, and donâ€™t see it checking to make sure that date exhausts the buffer, but I donâ€™t know the code well. Safari also depends on OpenSSL.

Correct me on any of these points and Iâ€™ll amend the post. I havenâ€™t tested this (although Google Security did a proof of concept against OpenSSL that precipitated the advisory).

You should upgrade to the most recent OpenSSL. Bleichenbacher also recommended people stop using signing keys with a â€œ3â€ exponent.