If you aren't following Tom Maddox's Opinity Weblog, now is a good time to start.  This piece made me wonder what will become of us all: 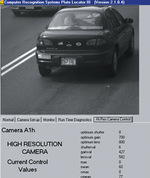 In recent years, police around the country have started to use powerful infrared cameras to read plates and catch carjackers and ticket scofflaws. But the technology will soon migrate into the private sector, and morph into a tool for tracking individual motorists’ movements, says former policeman Andy Bucholz, who's on the board of Virginia-based G2 Tactics, a manufacturer of the technology…

Giant data-tracking firms such as ChoicePoint, Accurint and Acxiom already collect detailed personal and financial information on millions of Americans. Once they discover how lucrative it is to know where a person goes between the supermarket, for example, and the strip club, the LPR industry could explode, says Bucholz.

Private detectives would want the information. So would repo men or bail bondsmen. And the government, which often contracts out personal data collection — in part, so it doesn't have to deal with Freedom of Information Act requests — might encourage it.

So if you don't want to be under surveillance, I guess you'll just have to move out to the hinterlands, off the grid, and out of automobiles–at the very least.

You know, this whole pervasive surveillance thing is getting depressing, especially when you combine it with RFIDs and ubicomp and similar technologies. It's Big Brother, Little Brother, Uncle Private Eye, Little Snoopy Sister, and every other nosy parker you can think of.

If you're interested in these sorts of things, my old buddy Bruce Sterling, who surfaces in the blog from time to time, writes pretty often about them in his Wired blog, Beyond the Beyond, which I highly recommend anyway on the grounds that Bruce is about as on top of things as anyone can be without having his head explode.

For more samples try this piece on the recent Eric Norlin / Ben Laurie exchange (my attempted joke that Ben must have had a “bad-hair day” is qualified as incendiary).  And there is a beyond the fringe story on the targeting of Craigslist users for violent crime (hmmm, seems like we might want to know who we're dealing with before an in-person meeting – which happens to be Opinity's forte).

Finally, there is news of what Tom calls an “OpenID Bounty”.  He puts it this way:

Cool open source news from OSCON: The OpenID folks have announced a $5,000 bounty to be awarded to the first ten software projects that implement OpenID as an identity provider or relying party.

I'm delighted to say that Opinity is one of the sponsors of the project. (There is a full list of sponsors on the OpenID site.)

To qualify for the bounty, the projects must also be distributed under an OSI approved license and have at least 200,000 internet users of currently installed public instances and 5,000 downloads a month. (There are other technical requirements; those interested should check OpenID's site.)

This is a really innovative way of encouraging development of both open-source development and adoption. If someone develops OpenID implementations for WordPress or MediaWiki–both of which would qualify for the award–doing so would open the door for desktop identity management for users. And, of course, all sorts of cascade effects will likely follow. I can see, for instance, developers creating OpenID implementations for a wide range of other blog and wiki platforms.

At this point, user-centric identity management needs, above all, users. The technical guys are working like speed freak beavers to create protocols and systems, so it's time to get this stuff on the desktop and into operation.