A few days ago I mentioned the outcry when Blizzard, publisher of the World of Warcraft (WoW) multi-player Internet game, decided to make gamers reveal their offline identities and identifiers within their fantasy gaming context.

I also descibed Blizzard's move as being the “kookiest” flaunting yet of the Fourth Law of Identity (Contextual separation through unidirectional identifiers).

Today the news is all about Blizzard's first step back from the mistaken plan that appears to have completely misunderstood its own community. 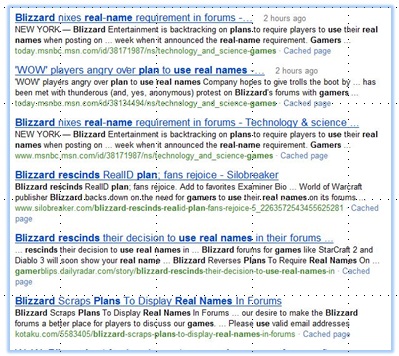 CEO Mike Morhaime  seems to be on the right track with the first part of his message:

“I'd like to take some time to speak with all of you regarding our desire to make the Blizzard forums a better place for players to discuss our games. We've been constantly monitoring the feedback you've given us, as well as internally discussing your concerns about the use of real names on our forums. As a result of those discussions, we've decided at this time that real names will not be required for posting on official Blizzard forums.

“It's important to note that we still remain committed to improving our forums. Our efforts are driven 100% by the desire to find ways to make our community areas more welcoming for players and encourage more constructive conversations about our games. We will still move forward with new forum features such as the ability to rate posts up or down, post highlighting based on rating, improved search functionality, and more. However, when we launch the new StarCraft II forums that include these new features, you will be posting by your StarCraft II Battle.net character name + character code, not your real name. The upgraded World of Warcraft forums with these new features will launch close to the release of Cataclysm, and also will not require your real name.”

Then he goes weird again.  He seems to have a fantasy of his own:  that he is running Facebook…

“I want to make sure it's clear that our plans for the forums are completely separate from our plans for the optional in-game Real ID system now live with World of Warcraft and launching soon with StarCraft II. We believe that the powerful communications functionality enabled by Real ID, such as cross-game and cross-realm chat, make Battle.net a great place for players to stay connected to real-life friends and family while playing Blizzard games. And of course, you'll still be able to keep your relationships at the anonymous, character level if you so choose when you communicate with other players in game. Over time, we will continue to evolve Real ID on Battle.net to add new and exciting functionality within our games for players who decide to use the feature.”

Don't get me wrong.  As convoluted as this thinking is, it's one big step forward (after two giant steps backward) to make linking of offline identity to gaming identity “optional”.

And who knows?  Maybe Mike Morhaime really does understand his users…  He may be right that lots of gamers are totally excited at the prospect of their parents, lovers and children joining Battle.net to stay connected with them while they are playing WoW!  Facebook doesn't stand a chance!